The causes of poverty | CPAG
Skip to main content

The causes of poverty

Poverty rarely has a single cause. A range of factors including rising living costs, low pay, lack of work, and inadequate social security benefits together mean some people do not have enough resources. 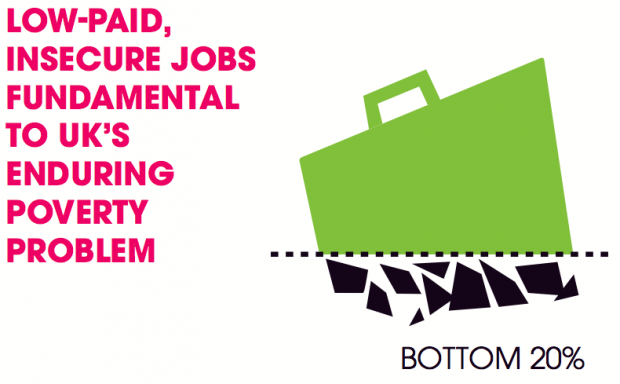 72 per cent of children living in poverty have at least one parent in work. The long-term deterioration of the terms of employment for workers in the lowest-paid 20 per cent of the UK labour market has been a major cause of enduring poverty in the UK. Low-wages, the high cost of childcare and part-time work all conspire to reduce incomes. Many low-paid jobs offer no opportunities to progress to better work and better wages. Others are insecure, with unpredictable hours and incomes.

Between 1975 and 2014, the real hourly wages of middle-income full-time employees doubled. The best paid saw their real wages rise by up to 189 per cent, while wages below the middle typically rose by only about 80 per cent. The wage difference is even wider for part-time workers.

Since 2006, there has been a 60 per cent rise in the number of people moving repeatedly between work and unemployment.

68 per cent of children in families with no working adults are in poverty.

People who are not working overwhelmingly want to work, but face barriers to employment. Principally these are ill-health and childcare, but also caring responsibilities for family members.

In-work benefits, such as universal credit, are currently insufficient to overcome these labour market challenges and keep people out of poverty.

In addition, the very high costs of housing and childcare increase families’ risk of poverty. It is generally accepted that where people are out of work or don’t earn enough money, the social security system should provide a safety net to prevent them falling into poverty. Unfortunately this is not the case.