Child poverty responds to government policy, and we can see that by looking back over the past couple of decades. 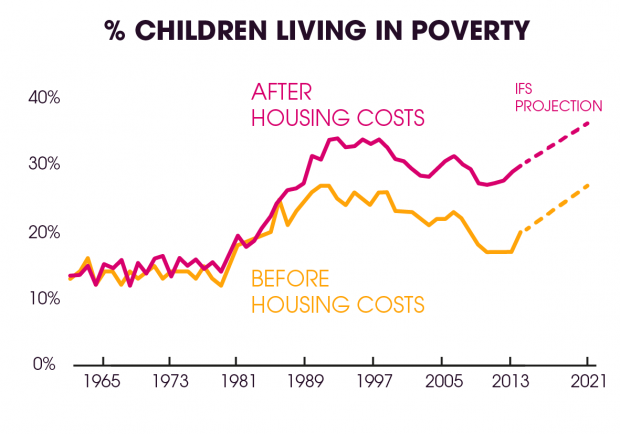 The rise and fall of the Child Poverty Act

In 2010, the Child Poverty Act was passed with cross-party support. It enshrined in law Tony Blair's 2001 pledge to end child poverty by 2020.

The Act imposed a legal duty on governments to produce a child poverty strategy and to move towards four UK-wide targets by 2020 as follows:

In 2016, the Welfare Reform and Work Act abolished the Child Poverty Act, including the targets to reduce poverty and the measure of poverty based on family income. The government is now required only to report to parliament on the number of children living in workless households, and educational outcomes at GCSE level. However, after a prolonged campaign [LINK], the government agreed to commit in law to regularly publishing data on the number of children in poverty.

After falling consistently from 1998 to around 2010, child poverty has begun to rise again. Currently, the latest figures show that 4.1 million children are in relative poverty, up from 4 million the year before.

It shows that from 1998/9 to 2004/5 child poverty rates declined at a steady rate and that the 2004/5 target of reducing child poverty by a quarter was narrowly missed. Studies conclude that this reduction stemmed from a number of policy interventions such as:

Between 2004/5 and 2009/10 the picture is less straightforward. Child poverty began to drift upwards again at the beginning of this period, but it started to decline again from 2008/09. Analysis suggests that there is a close relationship between these trends and changes to the tax and benefits regime. So when the Government increased investments in families’ social security, there was a notable reduction in child poverty.

Finally, projections from the Institute for Fiscal Studies suggest that after a short period of flat-lining, child poverty rates will begin to rise again in the near future. In 2016, the Resolution Foundation projected that by 2020, relative child poverty will have risen by 50%. The increase in relative poverty will undo almost all of the work done reducing poverty from 1999-2010. And the increase in absolute poverty (also up from 17.6 per cent in 2010/11) will mean that, over a decade, the income of families towards the bottom has actually gone down – something without precedent in modern times. Again, changes to tax and benefits have a key explanatory role.