Who is at risk of poverty?

Any family can fall on hard times and find it difficult to make ends meet. Life changes such as unemployment, illness or family separation can happen to us all. Increasing costs, especially for essentials such as food, housing and fuel, affect most people. Poverty isn’t something that happens to others. It’s something that can happen to almost anyone. But certain groups of people face a much higher risk of living in poverty than others.

Families with children face higher risks of poverty because of the extra costs of children and because of the effect on parents’ working hours. Children’s benefits do not fully compensate. Lone parents are more likely to experience poverty than those in a couple. 49 per cent of children in lone-parent families are in poverty.

Pensioner poverty has fallen as a result of increases in benefits to pensioners, the growth of private pension incomes and rising pensioner employment.

Scotland and Northern Ireland have a lower child poverty rate (at 24 per cent) than England (30 per cent) and Wales (31 per cent).

The high costs of living and especially housing in London puts extra pressure on low income families. 37 per cent of children living in London live in poverty.

THE DYNAMICS OF POVERTY 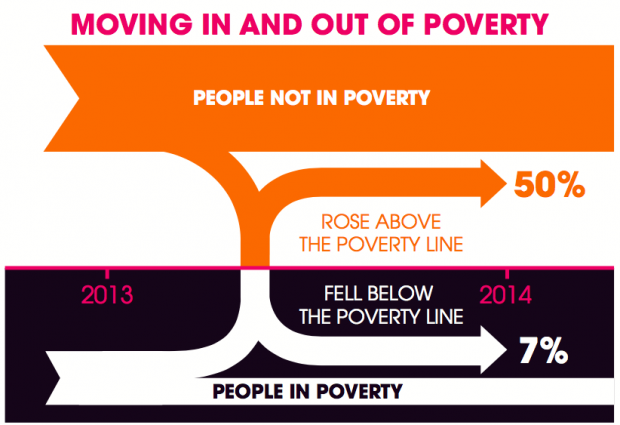 The effects of poverty are more profound when people live in poverty for longer, or fall deeper into poverty. The UK has a high rate of entries into, and exits from, poverty.

Children, lone parents, disabled people and people in households in which no one works are more likely to experience poverty, to remain in poverty for longer and to experience deeper poverty, than others.

In 2015, 7.3 per cent of the UK population, or approximately 4.6 million people, were living in persistent poverty (having been in poverty for three out of the last four years).