Financial help in the early years 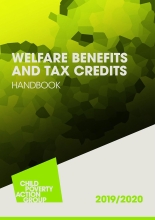 Benefit cap and those paid 4 weekly

SP and others v SSWP CO/3572/2019: On 12 September 2019, CPAG issued judicial review proceedings on behalf of a single parent and her children challenging the application of the benefit cap to the mother’s universal credit award despite the fact that she works 16 hours per week at national minimum wage simply because she is paid 4 weekly rather than monthly. Permission to apply for judicial review was granted on 5th December 2019.
Benefit cap Current Test case UK Universal credit Work and pay
Test case

R (Johnson, Woods, Barrett and Stewart) v SSWP [2019] EWHC 23 (Admin): This case concerns a judicial review challenging the rigidity of the assessment period regime under universal credit (UC) and the way that earned income is calculated, which results in some claimants being treated as earning two monthly salaries in one assessment period. Judgment was given on 11 January 2019 finding in favour of the claimants, but the SSWP appealed. The case will be heard by the Court of Appeal on 19th May 2020.
Current Test case UK Universal credit
Briefing

Managing money: the importance of autonomy

From time to time, we all get into difficulty managing our money. A boiler breaking, a car needing repair, a bigger heating bill than expected. These things can hit us hard and always seem to be poorly timed, particularly if money is already tight. We all have different methods of coping, and different ways of ensuring we keep on top of all the other bills and rent. Some people try to manage by taking the hit in one go; whereas others do the exact opposite, choosing to cut back less but over a longer period. Some will use savings and replenish these over time; others will try to cut back on their living expenses.
Blog Housing Housing benefit Secure futures UK Universal credit
Test case

Universal credit and lone parents under 25

Rogers and others v SSWP CO/3678/2019: On 17 September 2019, CPAG filed a judicial review claim challenging the lower standard allowance in universal credit for lone parents who are under 25. Permission to apply for judicial review was refused at an oral permission hearing on 11/12/19. CPAG has submitted a renewal application to the Court of Appeal.
Current Test case UK Universal credit
Blog

Human Rights Day is an opportunity to reflect on our rights and what they mean to us. At CPAG we are particularly concerned with rights in the context of the changing benefits system, and ensuring that human rights are upheld when such drastic reforms are introduced.
Blog Legal Secure futures UK Universal credit Welfare reform
Article

Universal credit childcare costs: up front and after

This case is a challenge to the lack of transitional protection, and inability to return to legacy benefits, in cases where the claimant's benefit entitlement is terminated, forcing them onto UC, and the decision to terminate their benefits is subsequently found to be incorrect. After an unsuccessful hearing in the High Court, we have been granted permission to appeal to the Court of Appeal and the case is due to be heard on 22/23 April 2020.
Current Test case UK Universal credit