Rising child poverty in Britain is a serious problem, made more serious by the failure to understand why those numbers are growing and to focus on the right solutions to it. As with most policy areas, we need the right analysis to get the right solutions. So getting our analysis right is not just about winning an argument, but about reducing the numbers of children growing up in poverty, unable to afford adequate nutrition or a winter coat, or to realise their potential.

One particular area where our analysis is poor is ethnicity. Here too there is a wider point: the public and policy makers seem not to understand the nature and extent of racial inequalities in Britain in 2020, nor seem to be considering why those inequalities persist, still less what might be done to respond to them.

These may seem bold claims. Yet in terms of both analysis and policy, it is difficult to avoid the conclusion that ethnic minority child poverty is simply viewed as a non-issue. Taking analysis first: not only are the facts of ethnic minority child poverty shocking, they typically come as a shock or surprise. Around 60 per cent of Bangladeshi children, 54 per cent of Pakistani children and 47 per cent of black children are living in poverty (once housing costs are taken into account). However there is almost no public discussion or awareness of the extent of this poverty, and no policies formulated to address these stark numbers. 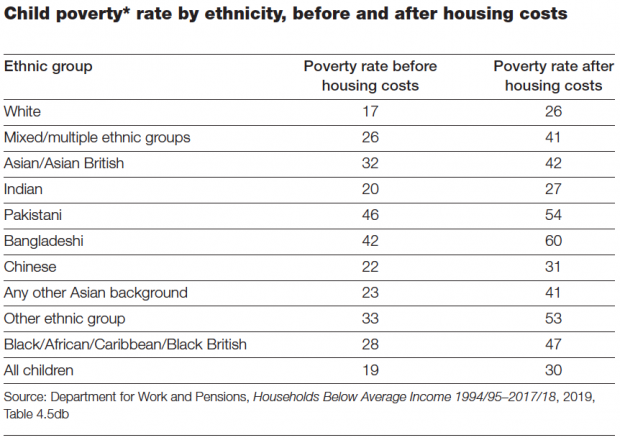 Consider also other policy areas, for example serious youth violence or safeguarding. Very little of the very public discussion on these issues addresses these stark levels of child poverty among ethnic minority people, nor much in the way of a response to that poverty. Furthermore, there is evidence that policy makers are going backwards in their understanding of child poverty and ethnicity.

A good (although hardly the only) example is the Troubled Families programme and the related efforts to define poverty (and child poverty) in ways that downplay the role of income, while emphasising other factors, such as family breakdown, alcohol abuse and educational attainment. One consequence of this sort of policy thinking is that because Bangladeshi children are doing better in school, and because their parents are less likely to divorce or drink alcohol, the government may now view Bangladeshi children as being less likely to experience poverty, despite no change in their material circumstances (see the Runnymede Trust’s response to the Government's consultation on how to measure child poverty).

Policy changes such as the benefit cap and the two-child limit have also led to a disproportionate increase in child poverty among ethnic minority children.1 The government has neither denied these effects, nor proposed any mitigating measures, leading to the conclusion that it is satisfied that rising poverty among ethnic minority children is an acceptable consequence of its policy decisions.

The fact that half or more of some ethnic groups are growing up in poverty has widespread impact on their experience in schools and as young people. As the wider literature demonstrates, child poverty also has long-term ‘scarring effects’, meaning that those who experience child poverty have a greater risk of poor experiences as young adults, in middle age and as they age. In other words, the proven, widespread effects of child poverty on adults means that Britain will be living with the consequences of racial inequality into the 2100s (given that those born in, for example, 2012 are likely to live until their late eighties).

And it is not just the public or policy makers who do not always note the very high rates of ethnic minority child poverty. Even campaigners on child poverty often fail to mention the issue of race – for example, when highlighting those local areas with the highest child poverty. Agreement that rising child poverty requires a policy response may be widely agreed. However, the fact that the proportion of black and minority ethnic (BME) people in those areas is a major driver of rising child poverty is still too little discussed. 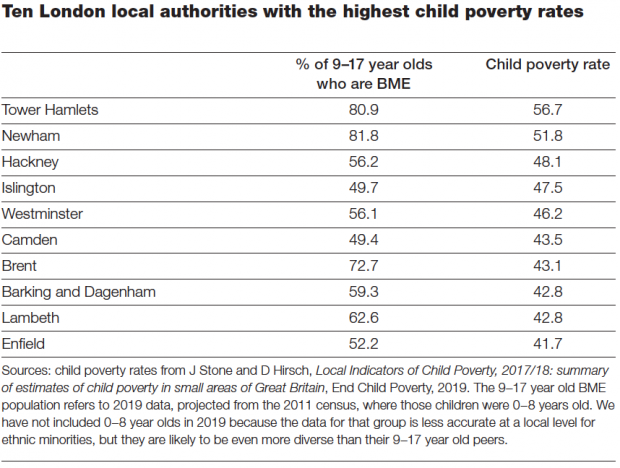 This leads to a wider point: that the focus on child poverty specifically (as contrasted with adult poverty), while understandable, can, however unintentionally, distract from some of the most important drivers of poverty in Britain’s households. Children are poor because their parents are poor, and their parents are poor because they do not have enough money. It is obviously still sensible to focus on child poverty: because the effects are so widespread and longstanding, because any interventions in childhood are more likely to have consequential effects, because children are not yet fully moral agents or responsible for their choices, and because public opinion is more sympathetic to child poverty than it is to adult poverty.

So it certainly makes sense to focus on child poverty, and especially to ensure that early years interventions are effective as possible in reducing child poverty.2 But ultimately the focus must expand beyond early years and schooling. Such interventions reduce the consequential harm of children living in poverty, but do not greatly reduce the risk of those children living in poverty in the first place (although they are likely to reduce the risk of the next generation of children being born into poverty).

The more general point is that ‘child poverty’ policy should focus on adult incomes. This should mean both expanding the social safety net and addressing structural inequalities in the labour market. It is now widely known that the majority of people living in poverty are in work,3 and that the labour market is not always a route out of poverty. It is less commonly observed that the lower wages among many ethnic minority workers, combined with their greater likelihood of living in households with children (and their younger age profile), means that they are more likely to be affected by in-work poverty.

Given over five decades of evidence showing that ethnic minorities face discrimination in the labour market,4 inequalities that result in greater rates of unemployment, under-employment (ie, working fewer hours or in less-qualified roles), as well as lower pay,5 anyone who is serious about addressing ethnic minority child poverty, or indeed child poverty generally, needs to tackle discrimination.

The point could be extended further: policy makers and campaigners should focus on a wider range of policies that affect adults if they are going to effectively address child poverty. In addition to the labour market, housing is a major area where addressing costs would have a particularly beneficial effect for households living in poverty generally, and for ethnic minority households specifically. Ethnic minority households constitute fully half of overcrowded households in Britain (in many of which children are sharing bedrooms). The higher rates of ‘after housing cost poverty’ cited at the beginning of this chapter attest to the importance of addressing housing costs for tackling BME child poverty.

That half and more of black, Bangladeshi and Pakistani children are growing up in poverty in Britain in 2020 should be viewed as a national crisis, and should be getting much more policy concern. One speculative explanation for why these figures and the human lives behind them merit such little focus is that while children generally are viewed as more sympathetic and less blameworthy for their economic circumstances than adults, the public has less sympathy for ethnic minority children. Alternatively, rising poverty among ethnic minority children may be off the policy agenda because of the more general lack of focus on tackling racial inequalities – or indeed poverty or low pay – more broadly over the last decade.