The Austerity Generation: promise of greater rewards from work broken under universal credit as families with children hardest hit by cuts | CPAG
Skip to main content

The Austerity Generation: promise of greater rewards from work broken under universal credit as families with children hardest hit by cuts

The promise of greater rewards from work made to working families has been broken as a result of cuts to Universal Credit and tax credits, with losses reaching thousands of pounds in many cases, new analysis by Child Poverty Action Group (CPAG) and the Institute for Public Policy Research (IPPR) shows.

‘The Austerity Generation’ reveals that the cuts to Universal Credit (UC) will put 1 million more children into poverty – which means the long term impact of austerity policies will be felt for many years to come by the UK economy and society more generally. The report also finds that families already at greater risk of poverty – including lone parents, families with very young children, larger families and those with a disability – will be especially hard-hit by a decade of cuts to the incomes of families with children.

The analysis reveals that if the Chancellor wants to restore Universal Credit’s promise of greater rewards from work and to be poverty-fighting, not poverty-producing, then he should use this month’s Budget to:

2. Fixing Universal Credit
The organising principle of Universal Credit was to strengthen the rewards from work but this analysis shows that, while work incentives may have improved for some families, big falls in family income caused by cuts and changes to Universal Credit have left many worse off overall, overwhelming any gains from increases in the ‘national living wage’, personal tax allowances and help for childcare. (Section 1b)

The report identifies – and costs up – a number of potential fixes for Universal Credit. See note to editors (7) below.

For example, for a lone parent with two children, aged two and five, considering moving into work at either 12 or 24 hours a week, the cuts to Universal Credit have cut effective hourly earnings and raised effective tax rates: (Table 4.1)

4. Families already at greater risk of poverty will lose most
All these figures are averages across the population, meaning losses for affected households can be much higher.
Families with the lowest incomes

Families where someone is disabled

6. Two-child limit
The two-child limit is expected to affect 640,000 families each year, containing 2 million children, by 2020/21. Two-thirds of these will be working families. Child Poverty Action Group has been granted permission for a judicial review of the policy, but a hearing is not expected until after the New Year.

“This report is the closest anyone has come to producing a cumulative impact assessment of a decade of social security cuts on families with children. It’s an incredibly detailed piece of work but its basic story is straightforward and shaming: since 2010, rather than investing in our children, government policy has been creating an Austerity Generation whose childhoods and life chances will be scarred by a decade of political decisions to stop protecting their living standards. This is the choice that’s being made in our names.

“The promise of increased rewards from work made to families with children under the new Universal Credit benefit has been broken. The Universal Credit we see today is not the Universal Credit that was sold to everyone a few years ago. Even after taking into account increases in the minimum wage, rising tax allowances and extra childcare help, working families will be the biggest losers from cuts made to the benefit system. Cuts to Universal Credit have substantially reduced the rewards from work for many families. Cuts and freezes to the work allowances will leave lone parents worse off by £710 a year on average, and couples £250 a year on average, across the population.

“If the government’s flagship anti-poverty measure ends up rolling out poverty then it’s hard not to see that as a colossal failure of public policy.

“This month’s Budget is an opportunity for the Chancellor to mount a full-scale rescue mission for Universal Credit. Child Poverty Action Group was the first to sound the alarm about the 6 week wait for Universal Credit, so progress on that would be very welcome, but this report makes it clear that the problems are more fundamental - the whole point of Universal Credit is being undermined. The Chancellor should restore work allowances, put a stop to the benefit freeze that’s squeezing families and pledge to give children’s benefits the same protection from rising prices as is given to the basic state pension.”

(1)  Media contact: Jane Ahrends on 020 7812 5216, 07816 909302 or [email protected] or Imran Hussain on 079834 02283
(2)  Embargoed copies of the report (99 pages) are available on request.
(3)    The analysis considered the impact of 34 separate cuts and changes to the existing tax credits and benefits system and 10 to the new Universal Credit system since 2010. The impact of an additional 24 cuts and changes to the existing system was not able to be modelled for technical reasons. Each of these cuts is listed in pages 5-12.
(4)  The roll-out of Universal Credit for all new applicants is expected to be completed in the autumn 2018. Tax credit claims are not expected to be fully transferred to Universal Credit until 2022 at the earliest.
(5)  The latest IFS poverty projections show child poverty rising from 27 per cent (2011-12) to 37 per cent (2021-22) https://www.ifs.org.uk/publications/10028
(6)  A major study by the LSE (Kerris Cooper and Kitty Stewart, 2017) found poorer children have worse cognitive, social-behavioural and health outcomes because they are poor, and not just because poverty is correlated with other household and parental characteristics http://www.lse.ac.uk/News/Latest-news-from-LSE/2017/07-July-2017/Income-...
(7)  The analysis identified a number of policy options to make Universal Credit poverty-reducing again: 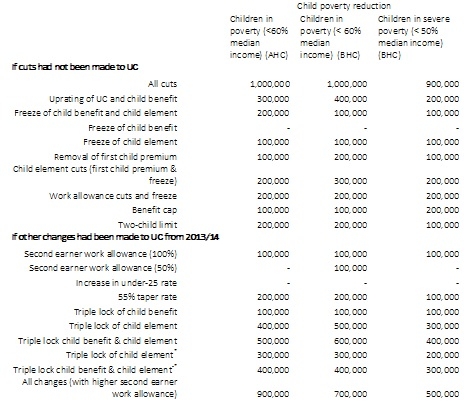 (8) CPAG is the leading charity campaigning for the abolition of child poverty in the UK and for a better deal for low-income families and children.
(9) CPAG is the host organisation for the Campaign to End Child Poverty coalition, which has members from across civil society including children’s charities, faith groups, unions and other civic sector organisation, united in their campaigning for public and political commitment to ensure the goal of ending child poverty by 2020 is met.