As our Early Warning System has found increasingly in recent months, people are facing problems with how decisions are being made about their benefits. It’s vital that people have the right of appeal, and that decision-making is clear and fair, and we know this is not always the case.
Benefit delivery Benefits for people from abroad Blog Carers Disability benefits Legal Mandatory reconsideration and appeals UK
Article

£58.00
This publication provides a practical guide to both new and seasoned practitioners on the law and case law on the operation of the ‘work capability assessment’ for both ESA and Universal Credit.
case law disability Disability benefits DLA Legal Universal credit Other publishers 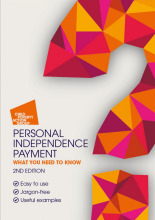 Personal Independence Payment: What You Need to Know 2nd Edition

Two disabled people who moved to the UK from other EU countries have won an important Appeal Court case which entitles them to disability-related benefits in the UK from shortly after they arrived rather than having to wait two years. The case, brought by Child Poverty Action Group and Harrow Law Centre, will enable disabled EU citizens and their carers who have a “genuine and sufficient” connection to the UK to receive social security support at an earlier point if they relocate to the UK.
Benefits for people from abroad Disability benefits Legal Press release UK
Press release

Child Poverty Action Group (CPAG) is seeking leave to appeal direct to the Court of Appeal on behalf of two disabled households who were left worse off after they were forced to move to universal credit (UC) because their existing benefits were wrongly stopped by the DWP. The move follows a High Court decision today which rejected a claim of unlawful discrimination brought by the two households and refused permission to appeal.
Disability benefits Disabled children Legal Press release UK Universal credit
Press release