The Scottish Free School Meals Campaign has enjoyed real success over the last 12 months. In early 2014, following sustained activity led by CPAG in Scotland along with Campaign members, the Scottish Government announced that as of January 2015, all children in Primary 1, 2 and 3 in Scotland will be entitled to a healthy free school lunch.

This statement was accompanied by a commitment from the Scottish Government that it will spend £55 million (£13m in year in 2014-15 and £42m in 2015-16) ensuring its policy becomes a reality.

The announcement that children in P1, P2 and P3 are to be entitled to free school lunches from January 2015 was swiftly followed by an amendment to the Children and Young People (Scotland) Act. The Act now gives the Scottish Government the power to require local authorities to provide fee school meals to children in selected year groups (rather than just to children whose families are in receipt of specific benefits, as had previously been the case). This means that - if it chose to do so - the Scottish Government could pass regulations requiring local authorities to provide free school meals to children in P1, P2 and P3 (and in any other chosen year groups).

To date, however, the Scottish Government has chosen not to use this power to pass regulations. It is of the belief that its policy commitment and the additional funding provided will be enough to ensure that local authorities provide free school lunches for children in P1, P2 and P3 from January 2015.

The Scottish Free School Meals Campaign is delighted with progress to date. However, much remains to be done.

While we appreciate that the Scottish Government anticipates the support and co-operation of local authorities in rolling out universal free school lunches there are strong benefits to creating clear legislative entitlement. These include the following:

For this reason, CPAG and other members of the Scottish Free School Meals Campaign will continue to work in the months to come to ensure that regulations are passed by January 2015, guaranteeing that children in P1, P2 and P3 get the healthy, free lunches they are entitled to.

Why are universal free school meals so important?

Further analysis of the pilot attributed the rise in take-up of free school meals by those who had always entitled to a “positive peer effect”. They concluded that children became more likely to use their entitlement to free school meals “because a greater proportion of other students in the school were doing so.”4

Evaluation of the Scottish pilots also pointed to a positive impact on family budgets and the home environment. There was, the evaluation concluded, “evidence that the trial had impacted positively on the home environment of pupils,” and that “the simple benefit of increasing disposable income was particularly evident amongst parents with more than one child.”5

Modelling conducted by economists at Dundee University concluded that the current system of means testing in relation to free school meals “fails to deliver welfare to the poorest in society”. The results show that universal free school meals would not waste money by benefiting better off families at the expense of those facing poverty. Only when entitlement is extended to the richest 10% of families is there no additional benefit to less well-off children.9

The commitment to universal free school lunches in P1 to P3 was secured with the support of: 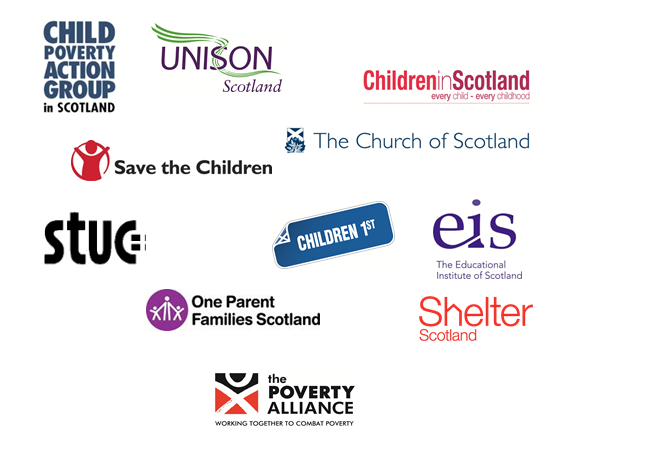 ‘I had to go and pick him up from the school one day because he had been sick. Just before lunchtime. He never had any dinner money left. And I said to him “what’s happening? What’s going on?” and he said “I’m getting bullied because I’m poor and I’ve not got any money for a bacon roll”. It’s hard enough as it is. He got bullied right though primary school ... and I thought “I cannae bear the thought of you being here and not enjoying it and just getting bullied because you haven’t got money for a bacon roll”.

“We were in the lunch queue one day and my pal says to me “ You can just by my lunch today. It’s my parents that pay for your free school meals anyway”.