We were delighted to learn last week that Tom Royston, a barrister who specialises in social welfare law, won the prestigious Legal Aid Newcomer Award at the Legal Aid Lawyer of the Year awards. We put Tom forward for the award because of his tireless work with us on key cases. These include the Rutherford case last year, in which we challenged the ‘bedroom tax’ in the Supreme Court and won. The Court ruled that the Government had discriminated against Paul and Susan Rutherford and their severely disabled grandson Warren, who needs overnight care.

We spoke to Tom about his work, and what winning this award means to him.

Tom, what led you to a become a barrister?

I used to work at a CAB [Citizen’s Advice Bureau], and from time to time I would ring up the CPAG specialist support helpline with a question about social security law, and think ‘these conversations are really interesting’. I wanted to do more of that sort of thing, and I am thrilled that I continue to work with CPAG because it is unrivalled in its social security law expertise, its ability to take a strategic view of the development of children’s rights, and its brilliant dedicated people.

What was it about social security law that appealed?

I think the idea of a rights-based welfare state was hard fought for good reasons by our predecessors, and is under serious threat at the moment. Fighting in court for the rights of benefit claimants helps show why the idea is important. Also, it is an area of law where the scales of justice can seem very unbalanced: in test cases, the government always benefits from expert and well-funded legal advice. My instinct is to try to level that up. 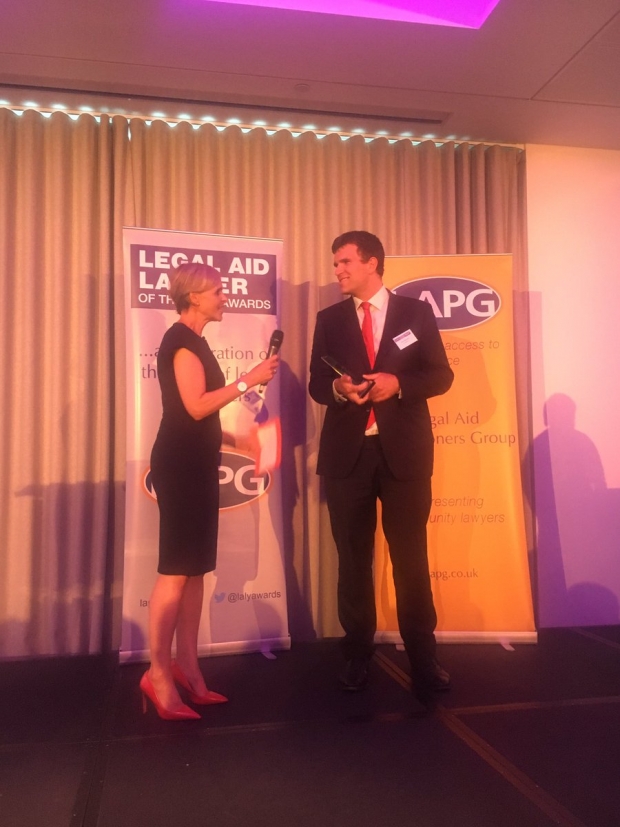 What does winning the Legal Aid Newcomer award mean to you?

It was of course very nice to win the ‘legal aid newcomer’ award, and I found it inspiring to hear about the work of other winners and nominees at the ceremony. It was a particular honour to be nominated by CPAG and our mutual client Paul Rutherford, for whom I have nothing but admiration.

You can support CPAG’s work by making a donation.