Parents working full time on the ‘national living wage’ (NLW) are significantly short of the income needed to give children an acceptable minimum living standard – as defined by the public – and the shortfall will grow as inflation combines with the current freeze on benefits to put family budgets under new strain, a report (1) warns. The freeze on working age benefits will force parents to find between an additional 6% and 9% of children’s costs in 2019 compared to 2012, as it gets steadily harder for low-income families to cover essentials, the report from Loughborough University’s Donald Hirsch for Child Poverty Action Group (CPAG) finds. Benefits will have risen by 3% between 2012 and 2019 while prices are projected to have risen by 12%.(2).

Currently, families in which both parents work full time for the ‘national living wage’ are 13% (or £59 per week) short of what they need to give their children a minimum living standard.(3) Lone parents working full time on the same wage are 18% short (or £68 per week) – that’s double the shortfall an equivalent lone parent family faced in 2012. (see scorecard below). The benefits freeze has meant that a 4% rise in the NLW this year has not prevented those dependent on it and on tax credits from facing a growing gap between their income and their costs.

In non-working families – for example, where someone is unemployed, sick or a carer –  the income gap is even starker. Both couples and lone parents relying on benefits now forgo about 40% of the budget that the public considers necessary for a socially acceptable minimum:  the shortfall is 42% for couples (£187 a week) and 40% (£146) for lone parents. 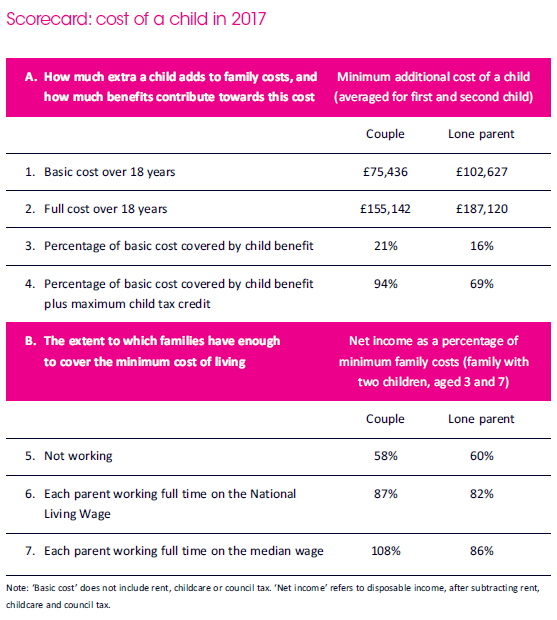 Support with costs has fallen: for couples, child benefit plus the maximum amount of Child Tax Credit now covers 94% of the basic cost of a child – compared to 98% last year. For lone parents, the proportion is 69% (compared to 72% last year).

The shortfall has risen: for families receiving maximum benefits, the overall benefit package now falls 31% short of covering the cost to a lone parent of bringing up a child – up from 22% in 2012. For couples the shortfall is only 6%, an increase in the shortfall since last year but a decrease since 2012 influenced by a more modest assessment of minimum costs made by couple parents in 2016 in the wake of years of austerity.

The Cost of a Child in 2017 is the sixth report in an annual series. It draws on what the public says every family requires to meet its basic needs and participate in society and is based on a series of calculations supported by Child Poverty Action Group and the Joseph Rowntree Foundation systematically monitoring the cost of a child.

In 2017 the freeze on benefits, first implemented in 2016, started to significantly erode parents’ ability to make ends meet, as prices started to rise, the report finds.

If the benefits freeze were maintained for the next five years – currently it applies only up to 2019 – shortfalls in the extent to which benefits meet family costs would grow steadily: for example, when not working, a couple with three children of 10,12 and 14 would be £325 per week short of what they need to meet overall family costs in 2022; a lone parent with three children of the same ages, would be £241 short (4).

On top of the general freeze on working age benefits, specific extra cuts have targeted different families at various times.    New families, both in and out of work, with an eldest child born after 6 April this year have lost an extra  £10.45 per week (12% of the cost of a first child) as a result of the scrapping of the ‘family element’ of child tax credit and  the equivalent in universal credit. (5)

In addition, third or subsequent children born after 6 April 2017 have lost £53.20 per week child tax credit – a full 59% of the cost of a third child – following the ‘two child limit’ imposed on child tax credit claimants.(6) For these families, support for the £90 per week cost of a third child has  plummeted from £66.90 (the maximum entitlement before the imposition of the two-child limit) to £13.70 (the value of child benefit, their residual entitlement).

Some (non-working) families will suffer additional losses - on top of the £53.20p - as a result of the benefit cap. A couple-family with three children with a private rent of £142 a week (the average lower quartile rent for a three-bedroom rental in regions outside London), for example, have lost a further £37.20 as result of the cap.

The report highlights the growing importance of childcare and housing costs in determining whether families can cover all the essentials.

Two parents with two young children currently get 8% above the minimum acceptable living standard if they work full time for the median wage (108%); but lone parents on the same hours and wage are 14% short, more than twice as much as in 2012.

Cost of a child excluding rent, childcare and council tax:

In the year to April 2017 the basic cost of a child (ie not including rent, childcare or council tax) from birth to 18 rose from £72,596 to £75,436 for a couple and from £99,035 to £102,627 for a lone parent.  That’s a rise of just under 4% - a rate that reflects price rises and is higher than general inflation at just under 3% because the price of some essentials – notably public and private transport costs  - have risen particularly fast.

“Our research shows that the benefit freeze will mean that children will be the main losers with the return of inflation. The cost of raising children is rising but for the first time in decades support for families is not keeping pace. The result is a yawning gap between what ordinary families need for a no-frills living standard and what they actually have. And the shortfall will grow if inflation rises further, with damaging consequences for children.

“With the return of inflation the benefits freeze has become toxic for struggling families. Rather than prioritising tax cuts which help the better off, the Chancellor should use the Autumn Budget to invest in helping families with children. Ending the benefits freeze should be the first step he takes to re-balance the finances of ordinary families.”

"After a lull in inflation, the cost of essentials is once again rising. For the first time in post-war history, these cost increases are not being matched by increases in support given to families from the state. While this policy persists, the struggle that low-income families face to make ends meet will become steadily harder, especially because it is being combined with numerous other cuts including the benefit cap and the bedroom tax.

“These cuts are particularly painful for non-working families, who already have little over half what they need to cover family costs. For them, the “safety net” of means-tested support no longer merits this name, since it does not offer the safety of an income capable of covering essentials. Families unable to cover their costs on benefits are typically having to fall back on help from their families, run up large debts or undergo serious hardship."

(1) The Cost of a Child in 2017 calculates the costs of a child based on the ‘minimum incomes standard ‘(MIS) – the income that people need in order to reach a minimal socially acceptable standard of living in the UK. The MIS is calculated by specifying baskets of goods and services (ranging from food, clothing, heating bills, to modest items required for social participation such as buying birthday presents) required by different types of household in order to meet this need. The cost of an individual child is calculated as the difference that the presence of that child makes to the whole family’s budget. The report, available on request, was produced by CPAG as part of a programme of work on the cost of a child, also involving the Joseph Rowntree Foundation. Its author Professor Donald Hirsch is Director of the Centre for Research in Social Policy, where he leads the Minimum Income Standard for the UK programme. He has written widely on poverty and related fields.

(3) Calculation based on a family with two children aged 3 and 7, after subtracting rent, childcare and council tax.

(4) Calculation assumes inflation reverts to 2% per annum from 2019.

(5) The removal of the family element, received by all families receiving child tax credit (which include 7.3 million of the country’s 12.9 children) and in most cases worth over £500 a year, started to take effect in 2017. It is being implemented only for ‘new families’ – ie, those whose oldest child was born on or after 6 April 2017.

(6) The limit of child tax credit entitlements to two children, severely reducing the income of around 3 million children in larger families. This policy also only comes in with ‘new families’, affecting those with a third or subsequent child born on or after 6 April 2017. Thus, rather than making individual families worse off, it makes future support for the family types affected far more frugal

Table 4.1 The effect of cuts on children’s benefits, relative to the cost of a child 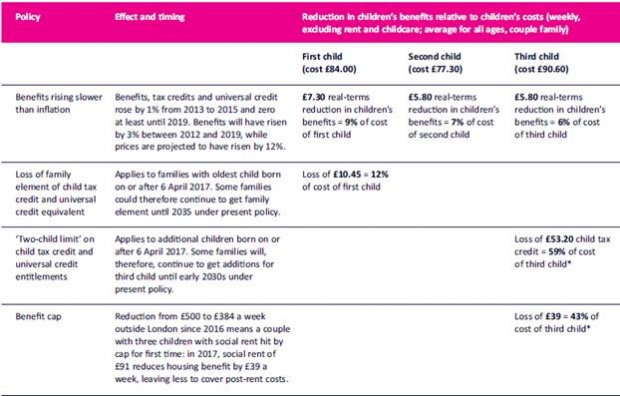 The Cost of a Child in 2017
Benefit levels Childcare Children’s benefits Cost of a child Costs and spending Housing Press release UK Work and pay
Press release
Published on: