This blog shows what has happened to the value of three important social security benefits since 2009 up to last year 2018. Results are presented for three benefits:

The three figures below show the trends in benefit rates in (a) nominal (cash) terms, (b) real (April 2018) terms – taking account of inflation – and (c) as a percentage of average earnings.

First, the basic state pension for a single person has increased according to all measures: in nominal terms, in real terms and as a precentage of average earnings. The single pensioner is £9 better off in 2018 after taking into account inflation than they were in 2010.

Figure 1: Single person working age benefit £ per week in nominal and real April 2018 terms (left axis) and as a % of average earnings. 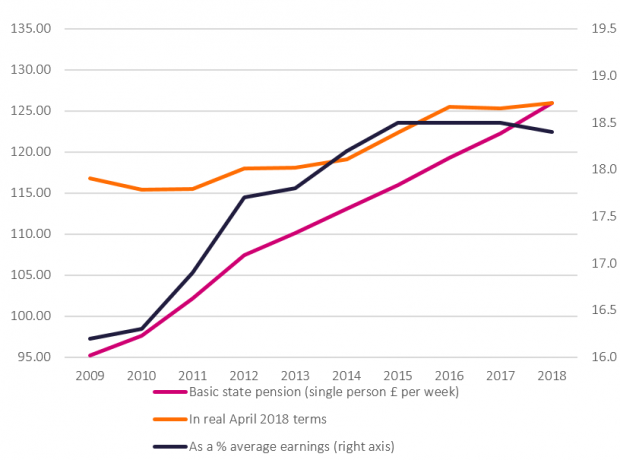 In comparison, however, unemployment benefits/JSA has lost more than £5 of real value compared to 2009 and has also fallen in comparison to average earnings. 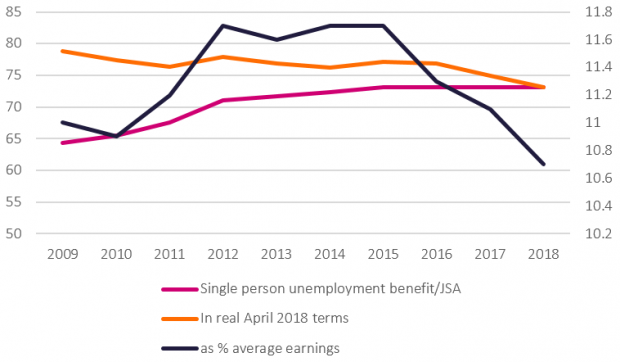 Figure 3 presents the results for child benefit payable for two children. The nominal value of child benefit has been increased by £1.20 since 2009, but it has fallen as a proportion of average earnings and by over £6 per week in real terms. 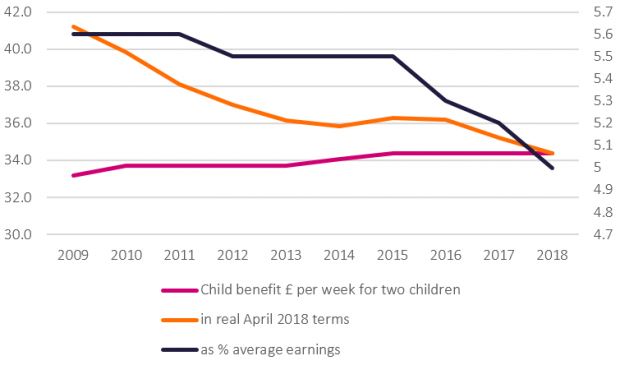 These figures show clearly how austerity has led to a growing gap between the living standards of pensioners and those of working-age claimants, particularly families with children. Working-age claimants and families with children have become substantially worse off since 2010 which explains the increases in both poverty rates and poverty gaps (how far families fall below the poverty line), the increased use of food banks and increased levels of destitution. It is vital that working age benefits are increased to restore their value, and linked in future to an index to ensure that they rise at least in line with inflation.

This blog has been revised slightly following the publication of government statistics on 26 March 2019.