As the House of Lords prepares to vote on tax credit cuts (on Monday 26th October), new analysis published today by Child Poverty Action Group reveals the extent to which workers in different jobs could lose out as a direct result of the controversial, proposed cuts. Nursery nurses, security guards, bank clerks and hospital porters are among those who would take heavy losses, the research shows.

To illustrate the impact of these cuts, CPAG calculated the losses which can be expected by tax credit recipients in various different jobs next year. These calculations are for sole earners working full time, either single parents with two children or a sole earner in a couple-family with two children, and do not include the impact of other changes to tax and benefits. 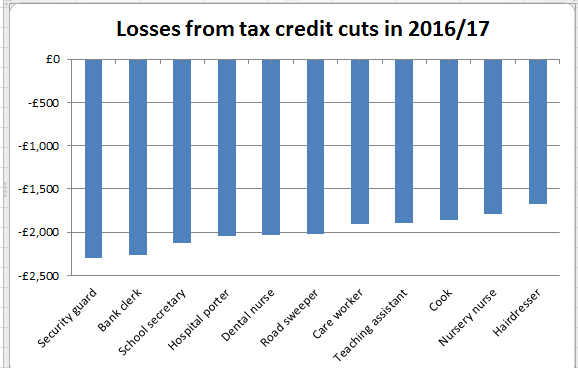 “Nobody who supports hard-working families can think it’s right to suck £1,788 from the tax credits of a nursery nurse’s annual income, or £2,304 from a security guard, £1,669 from a hairdresser. These are grafting parents, often working long hours and trying to provide for their kids. And if you’re struggling now to pay for food, utilities, fares and your children’s clothing, these kind of losses must make you fear for the future. The Government has had the message loud and clear from right across the political spectrum: there isn’t a case for cuts that would target working families, increase child poverty and damage family security.”

Nationally £4.4 billion would be taken from low-paid families if the cuts are approved. 3.2 million low-paid workers would lose an average of £1,350 next year, with some low-income families keeping just 3p in every extra £1 they earn.

When Chancellor Gordon Brown scrapped the 10p tax rate in 2007, making low-earners £2-3 worse off per week, George Osborne called it “punish[ing] low income families”. But the current Chancellor’s changes to tax credits will take more than ten times as much – £26 per week – from the pockets of low-income working families.

CPAG believes that the proposed tax credits cuts would damage work incentives and increase child poverty. The cuts are not compensated for by other changes such as the National Living Wage, rising income tax threshold or free childcare offer and the impacts on families have not been adequately assessed.

(1) The table shows lost income for families in 2016/17 compared with 2015/16 due to proposed changes to tax credit taper and threshold. Calculation based on typical gross earnings from Office of National Statistics Annual Survey of Hours and Earnings 2013 and House of Commons Library Briefing Paper on Tax Credit Changes from April 2016.

(2) The Government is seeking to implement announcements in the July Budget to withdraw tax credit support from families earlier (by reducing the allowance for how much people can earn before tax credits start to be withdrawn) and at a faster rate as the incomes of the low paid rise (by increasing the taper rate). Peers will vote on the Statutory Instrument today.

(3) The proposed changes are on top of other changes to tax credits in the Welfare Reform and Work Bill, currently in Committee, which seek to freeze tax credit levels for four years and to limit the child element of Child Tax Credits and Universal Credit to two children from April 2017.

(4) CPAG is the leading charity campaigning for the abolition of child poverty in the UK and for a better deal for low-income families and children.

(5) CPAG is the host organisation for the Campaign to End Child Poverty coalition, which has members from across civil society including children’s charities, faith groups, unions and other civic sector organisation, united in their campaigning for public and political commitment to ensure the goal of ending child poverty by 2020 is met.