The Campaign to End Child Poverty has today published new figures showing that London contains 14 out of the top 20 local authorities with the highest rates of child poverty across the UK.

The Campaign is publishing today a new report and data that provides a child poverty map of the whole of the UK including a full data set showing the child poverty rate for every ward, local authority and constituency in London.

Tower Hamlets is the London borough with the highest rate at (49%) and Richmond upon Thames the lowest (15%). In fifteen of the 33 London boroughs between one third and a half of children are poor.

Half of the top 20 UK parliamentary constituencies with the highest child poverty rates are in London. Bethnal Green and Bow which has 49% children in poverty is the highest in London and the lowest are Wimbledon, Twickenham and Richmond Park which each have 15%.

The child poverty hotspots in terms of London local authorities are:

The local authorities with the lowest rate of child poverty in London are:

“These figures reveal just how widely and deeply child poverty reaches into our communities, even those areas generally regarded as well off. Far too many children whose parents are struggling to make a living are suffering as a result and missing out on the essentials of a decent childhood that all young people should be entitled to. We can and must do better for our children.

“Poverty ruins childhoods and reduces life chances. Failing to invest properly in children is a false economy: already child poverty costs the country £29bn each year and in the long run taxpayers will foot an even higher bill for correcting the damage.

“We are calling on politicians of all parties to urgently set out a clear roadmap towards ending child poverty which includes the additional actions needed and the measures by which progress will be tracked."

London boroughs: percentage of children in poverty (after housing costs) 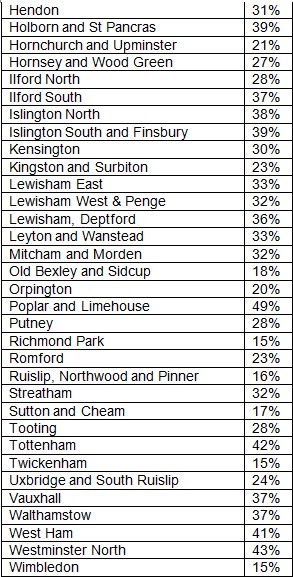 (1) In January 2014, the Institute for Fiscal Studies published projections showing that under current policies child poverty will rise from 2.3m (2011-12) to 3.2m by 2020 on the statutory Before Housing Costs measure. The Government says it is on course to end child poverty by 2020. On the After Housing Costs measure, the IFS projected child poverty would increase from 3.5m (2011-12) to 4.6m by 2020. IFS predictions for child and working-age poverty from 2010 to 2020 can be found here

(3) The full national report is attached with the email distribution of this release and can be obtained on request under embargo from the Campaign (see contact details below) and will be published on the campaign’s website on 15 October 2014.

(4) These estimates have been complied for End Child Poverty by Donald Hirsch and Laura Valadez, Centre for Research in Social Policy (CRSP), Loughborough University using a methodology introduced for this year’s figures to better reflect both out of work and in work child poverty levels. The estimates are based on official benefit and HMRC tax credit data and have been adjusted to reflect unemployment rates and the differing risks of child poverty for in and out of work families. A more detailed explanation is contained in the report.

(5) Ward level data sheets for UK regions can be provided on request during the embargo period (please see regional contact details below). The local data has been produced to correspond as closely as possible to the official definition of poverty used by the government in its regional and national data. However, direct comparisons between the two data sets should not be made (a full explanation of the methodology can be found in the report).

(6) An End Child Poverty representative will be available for comment in national, regional or local media.

(8) The Campaign to End Child Poverty is made up of more than 150 organisations from civic society including children’s charities, child welfare organisations, social justice groups, faith groups, trade unions and others, united in our vision of a UK free of child poverty.

London and UK national media only