"These figures make grim reading for anyone looking for progress on child poverty.  Because, make no mistake, we are facing a child poverty crisis in the years ahead and the Government is not going to meet the child poverty targets it signed up to. Rather than opening up opportunity, the UK is now going down the road of closing down life chances for hundreds of thousands of children in low income families.

“On the government’s preferred absolute poverty measure, there are half a million more children in poverty than there were in 2010.

“Today’s figures show us that most parents of poor children are working and in couples. The root causes of child poverty are not to be found in parents’ behaviour. It is low pay, the lack of adequate childcare, and cuts to children’s benefits we should look to for an explanation of child poverty and not to parents who struggle daily to protect their children against its worst effects.

“Instead of highlighting symptoms of poverty, such as debt, the Government must tackle the root causes of poverty. It needs to protect children's benefits with the same triple lock protection pensions enjoy, fix the  deep cuts to tax credits help for the low paid, tackle cripplingly high rents, high childcare costs and extend the good work it’s done on free school meals.” 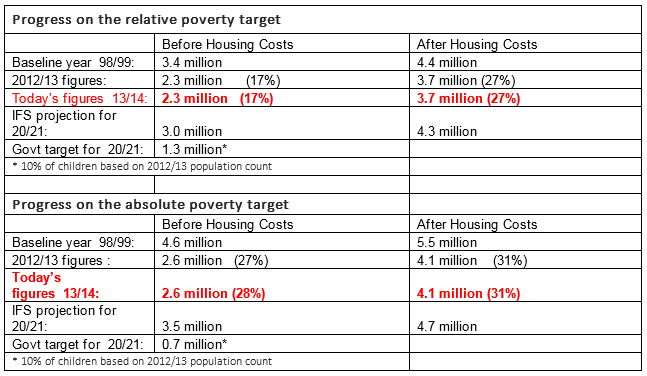 Sources: HBAI 1994/95-2013/14, Department for Work and Pensions; ‘Child and working-age poverty in Northern Ireland over the next decade: an update’, Institute for Fiscal Studies, September 2014

The HBAI statistics are derived from a sample rather than the whole population; the survey results are estimates not precise figures.  This means figures are subject to a margin of error, so that no change could in fact mean an increase or a decrease in poverty.