As parents face back-to-school costs, new research published today by Child Poverty Action Group and co-funded by the Joseph Rowntree Foundation shows that parents face a growing struggle to provide a decent standard of living for their families in 2013.

Key findings from the research, carried out by the Centre for Research in Social Policy at Loughborough University:

“This research paints a stark picture of families being squeezed by rising prices and stagnant wages, yet receiving ever-diminishing support from the government over the course of the last year.

“Every parent knows it’s getting harder to pay for the essentials their children need, and they don’t feel like politicians see them as a priority. Child benefit and child tax credit have been cut at the very time families need them most. Families are getting worse off and parents know it.

“If every child in Britain can grow up healthy, well-educated and an active participant in their community, we all benefit from a more prosperous economy. This was well understood by the post-war generation who prioritised universal benefits for all children despite being much deeper in debt than we are today.

“As we move towards a ‘living standards election’, now would be a good time to renew our national commitment to all our children.”

“This research looks at how much it costs parents to give their children a standard of living that the public think is the minimum acceptable.  The task of making ends meet for families with children has always been hard, but is getting harder, and balancing family budgets has become a perilous and delicate act for hard-pressed parents.

“Flat lining wages, cuts to benefits and tax credits and the rising cost of essentials is creating a growing gap between income and needs.

“The next election is likely to be the first since the 1930s where living standards are lower than the last poll. All parties must go to the country with policies and a commitment to help the prospects of low-income families.

“The risk and costs otherwise are enormous. Child poverty costs the Treasury £29 billion a year – a price we can scarcely afford to pay, particularly in the current economic context.” 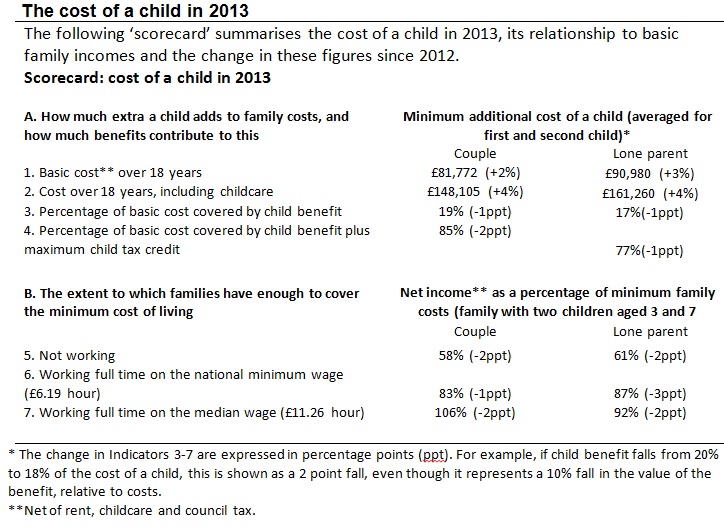 -        the adequacy of social support for ensuring basic costs are met

-        the relationship between children’s costs and headline inflation

It will be published by Child Poverty Action Group each August/September so please note in your future planning.