'Cost of a child' revealed as crisis in family finances looms

Parents working on the minimum wage are on the brink of a new crisis in family finances that will leave many stranded when it comes to meeting no-frills family costs, warns a new report produced for the Child Poverty Action Group.

Families with both parents working full time at the national minimum wage are 16 per cent short of the basic amount needed to provide themselves a minimum standard of living according to the new report. For a couple with two children, that’s a gap of £75.75 per week.

Commenting on the new figures the Director of the Child Poverty Action Group (CPAG) in Scotland, John Dickie said;

“It’s shocking that even when they are both working full time a couple with children on the current minimum wage are still left well short of what they need for no-frills basics, even when low inflation kept the costs of a child relatively flat last year. Over one in five children already lives in poverty in Scotland and the oncoming barrage of social security cuts will push the number higher – at greater cost to the taxpayer. We should be backing parents’ efforts to build a future for their children, not consigning them to financial misery”

The Cost of a Child 2015 finds the minimum cost of a child from birth to age 18 remains high at £149,805 (a 1.6% increase on 2014 and a 5% increase since 2012). The report concludes that the outlook appears to be for the high cost of a child to rise less steeply in future years but that state support in covering these costs to deteriorate sharply as a result of UK government policies, creating a net loss for most low income families.

The report shows a wider gap for out-of-work couple families – at 43%. For lone parents, the shortfall is 13% for those in work– 39% for those not working. 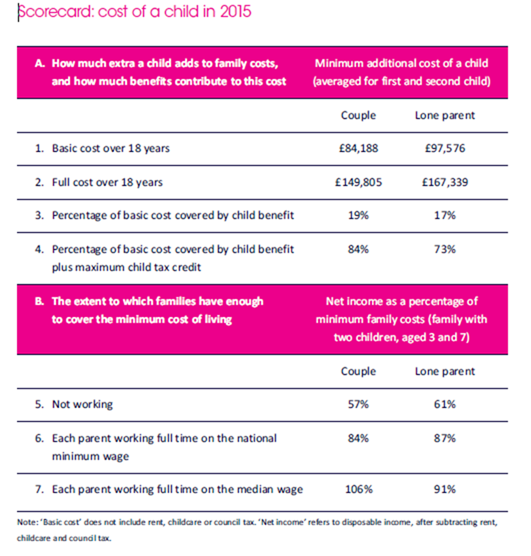 Now in its fourth year, The Cost of a Child 2015 draws on what the public says every family requires to meet its basic needs and participate in society. It examines the costs associated with raising children, and the extent to which parents struggle to meet them even when they work.

1. A four-year freeze on working age benefits, including child benefit. This means that as children’s costs increase, help to cover them will not. The OBR forecast of a 7% cumulative inflation rate from 2015 – 2019 will potentially cause the basic cost of a first child to rise by approximately £6 to £8 a week, leaving low-income families both in and out of work that much behind in meeting this cost. From 2017, new claimants will have their tax credit or universal credit cut by a further £10.45 per week per family, with the loss of the family element of child tax credit.

2. Cuts in the amount parents can earn before tax credits or Universal Credit start to be withdrawn. For families on tax credits, this lower earnings level once combined with the new, higher rate at which credits are withdrawn as wages rise, means that top ups for the low paid will start being reduced earlier and also at a steeper rate, amounting to a major loss of £24 per week.

Combined with the freeze and the removal of the family element (see previous paragraph), this means a cut of nearly £50 a week in the level of support for a working family with two children, relative to the cost of those children, by 2019 for new claims.

For families claiming universal credit, the reduction in the amount they can earn before the credit starts to be withdrawn (at 65p from every extra pound), will mean a £12 weekly loss for lone parents and £5 for couples.

3. Lowering the benefit cap to £23,000 in London and £20,000 outside the capital will reduce the net income of families already hit by the cap by £58 per week in London and £115 outside it. For those affected, out-of-work benefits, which until recently covered about two-thirds of minimum needs, will typically be slashed to less than half the minimum needed.

4. Limiting tax credits to two children from 2017. For a couple with three children, the cut represents 16% of minimum family costs.

The report says the new, extra support for childcare is potentially good news. Extra provision and help with 85% of the costs for Universal Credit claimants from 2016 could bring down costs substantially for families using paid childcare. But, the report warns, the new financial support will not be available to families on tax credits and the delay in rolling out universal credit will put off any gains for families until 2016 at the earliest. And cash limits on support levels could leave many parents having to bear ongoing cost increases in childcare.

"With low inflation, the cost of raising children has stopped growing, but many families still lack the incomes they need to afford even the basics. Over the next five years, some of the most vulnerable families will see support for meeting these costs reduce, sometimes leaving them with less than half of their family's minimum needs if they are not working. The hardest hit will be larger families - the punishment for falling on hard times if you have more than two children will be something close to destitution. However, even with two children, many families with anything more than a very modest rent will hit the new Benefit Cap levels, and have their benefits reduced to levels that make it ever tougher just to get by."