The overall cost of a child over 18 years (including rent and childcare) is £150, 753 for a couple and £183,335 for a lone parent. But work doesn’t pay low-income families enough to meet a no-frills standard of living, new research from Child Poverty Action Group (CPAG) shows.(1)

A combination of rising prices, benefits and tax credits freezes, the introduction of the benefit cap and two-child limit, the bedroom tax, cuts to housing benefits and the rolling out of Universal Credit have hit family budgets hard. Life has been getting progressively tougher for families on low or modest incomes over the past ten years, with families on in-work and out-of-work benefits hardest hit, the report warns.

Despite the introduction of the ‘national living wage’, low-paid families working full-time are still unable to earn enough to meet their families’ needs. The gains from modest increases in wages have been clawed back through the freezing of tax credits.

Even families with two parents currently working full time on the ‘national living wage’ are 11% (£49 per week) short (2) of the income the public defines as an acceptable, no-frills living standard.

The cumulative effect of cuts, frozen benefits and new punitive measures hit lone parents particularly hard. For lone parents, even a reasonably paid job (on median earnings) will leave them 15% (£56 per week) short of an adequate income because of the high cost of childcare. A lone parent working full-time on the ‘national living wage’ will be 20% (£74 per week) short of what they need to achieve a minimum standard of living. However, a lone parent relying solely on benefits will go without 40% of the budget they need for a socially acceptable minimum.

With the introduction of the two-child limit, families with three or more children fare worst – a third child born after 1 April 2017, for whom no additional support will be provided, costs around £86,500 or £4,800 a year excluding childcare.

Larger families on out-of-work benefits who avoid being hit by the two-child limit will instead be hit by the benefit cap which restricts support to £23,000 in London and £20,000 outside London regardless of family size. The impact of the benefit cap means that an out-of-work family with three children living in a privately rented home will receive just a little over a third of what they need to meet their needs, with a shortfall of around £400 per week. (3)

The cost of a child is heavily influenced by the cost of childcare, a major strain on working low and middle-income families. Full-time childcare costs around £80,000 over the course of childhood, making up around half of the total costs of bringing up a child. For those receiving Universal Credit, 85% of childcare costs can be reimbursed but the reporting requirements are complex and because Universal Credit is paid in arrears, it is hard for parents to pay childcare fees in advance.

The new 30 free hours early years entitlement (available to parents of 3 and 4 year olds working more than 16 hours per week at the minimum wage) has helped, but parents can face difficulties finding nurseries and childminders offering this (4). In practice, low income families facing high childcare costs will often choose instead to limit their working hours – reducing family income significantly – because childcare is unaffordable.

The costs of a child are calculated according to a minimum standard of income that covers the costs of essentials such as food, clothes and shelter as well as other costs necessary to participate in society. It looks at the needs of different family types and is informed by what ordinary members of the public feel is necessary for both couples and lone parents bringing up children. “The Cost of a Child in 2018” from Loughborough University’s Donald Hirsch, is the seventh report in an annual series. 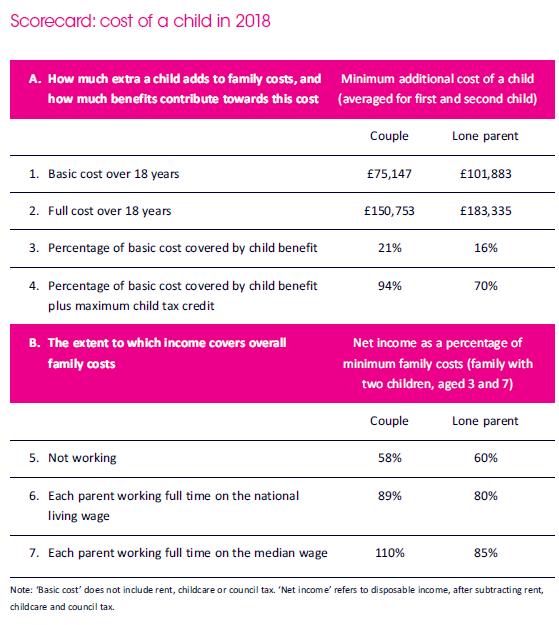 “Today, the majority of children growing up in poverty have working parents. While the number of parents in work is increasing, income from work alone is not sufficient to enable some to meet their families’ needs or escape poverty and the cost of a child is substantial. There is strong public support for government topping-up the wages of low-paid parents and investing in children is the best long-term investment we can make. By using the forthcoming budget to unfreeze benefits and restore work allowances, the government can take steps towards making work really pay.”

“Throughout the past decade, families in and out of work who rely on some public financial help to make ends meet have found things ever tougher, as neither tax credits nor benefits have risen in line with growing living costs. But the pain is not being evenly spread. Some families who work full time, but on low pay, are relatively well-positioned to gain from a higher minimum wage and selective improvements in help with childcare. However, families with fewer working hours find it hard to access this help. Out of work families, together with working families with more than two children, are being hit hardest by ongoing cuts. Current policies will force an increasing number of families to live on less than half of what they need. This exceptionally harsh regime has been caused by the breaking of the relationship between family entitlements and family needs, under arbitrary cuts that leave some families close to destitution.”