Thanks to the UNICEF Office for Research a book has been published today tracing what happened to children in rich countries following the financial crisis:

B Cantillon, Y Chzhen, S Handa and B Nolan, Children of Austerity: impact of the great recession on child poverty in rich countries, Oxford: OUP, 2017.

Chapter Nine is by Jonathan Bradshaw, Yekaterina Chzhen and Gill Main on ‘The impact of the recession on children in the UK’.

The chapter was inevitably written some time ago. While the conclusion of the chapter still holds this blog updates some of the data.

The deep recession of 2008–09 did not immediately translate into a rise in child poverty rates. Relative child poverty, based on 60 per cent of contemporary national median income, continued falling between 2007 and 2013. This is in part the result of median incomes—and therefore the poverty thresholds—falling during this period. However, the fiscal stimulus in place at that time cushioned the impact of the economic crisis on households with children. Now (see Figure 1) in the last two years for which we have data the relative child poverty rate has begun to rise both before and after housing costs.

Figure 1: Child poverty rates <60 per cent contemporary median before and after housing costs 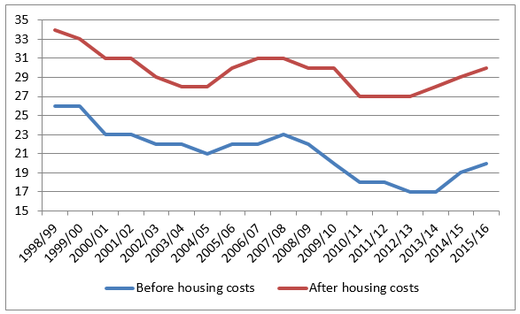 The main reasons for this increase in child poverty have been and will continue to be the cuts in in-work benefits. In particular

These have to be set against an improvement in employment such that 67 per cent of children in poverty in the UK now have a parent in employment. The introduction of the increased minimum wage though welcome has not and will not mitigate the cuts in benefits for families with children. As universal credit replaces tax credits it will further reduce the incomes of families with children – especially low income families.

By the mid-1980s the UK had one of the highest child poverty rates in all rich countries. After 1997 it managed to reduce child poverty using employment policies but particularly cash benefits. When the crisis struck in 2008 the Labour Government responded with policies designed to protect families with children. But the Coalition after 2010 adopted austerity measures which especially harmed families with children. Now the Conservative Government since 2015 is reinforcing these measures with a further £12 billion cuts in working age benefits.

The 2010 Child Poverty Act targets have been abandoned and we are no longer on course to achieve any of them (see Figure 2). The UK is set to slide down the international league table. Now the Institute for Fiscal Studies expects relative child poverty to increase from 18.8 per cent in 2014/15 to 26.6 per cent in 2021/22 before housing costs and from 29.0 per cent to 35.7 per cent after housing costs. 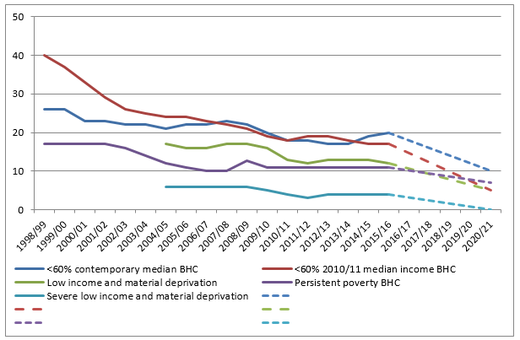 The decline in real earnings during the recession and subsequent austerity period was combined with an increase in the cost of necessities. So it is important to monitor deprivation as well as income. Table 1 shows the proportion of children lacking necessities, and Table 2 the proportion of adults living in families with children lacking necessities, in 2007/08 compared to 2015/16. Items are counted as lacking if parents report that children do not have the item because the household cannot afford it (answer options include: children have it; lack it because the parents cannot afford it; or lack it for another reason). Table 1 shows that the proportion of children lacking items has fallen or is unchanged in most cases, except a holiday away from home. The same is true in Table 2 except that parents were more likely to lack holidays away from home and insurance for the content of their dwellings. In general what is striking is the lack of any real improvement in living standards over this eight year period.