Budget 2014: Child Poverty Action Group on the impact on families

“Today’s Budget tries to lock-in austerity for millions of low-paid families, poor children, carers and disabled people. Announcing a cap for social security spending without a plan to address the root causes of low pay, high rents and high childcare costs, simply forces the most vulnerable in society to pay the price for inaction.

“It is action on living wages, fair rents, affordable childcare and fairer taxes that will help children in low-income families and taxpayers in the long run. And what’s needed today is some restoration of the value of child benefit, more free school meals, a real terms increase in the NMW, more help with recently introduced council tax bills and funding for local welfare schemes.  Apart from the welcome future increase in childcare costs under universal credit, there is nothing here to help improve living standards today.

“An increase in the personal tax allowance does little to help the lowest paid. The lowest earners don’t pay tax anyway, while others keep just 15p in every extra pound as in-work benefits, like housing benefit, are adjusted down as take-home pay rises. Sadly, the Coalition ignored positive proposals to boost earnings disregards for in-work benefits, which is a far more effective way to increase the living standards of low paid workers.

“The Chancellor published details today demonstrating that the poorest families are the worst affected by the government’s austerity measures. The Chancellor’s plan could be called the ‘Great Regression’ because it’s mainly the poorest who are hardest hit, while most in the wealthier half of the population are made better off by tax cuts. The Coalition is set to leave a legacy of higher child poverty rates and budgets that have made poor households poorer, and wealthy households richer.” 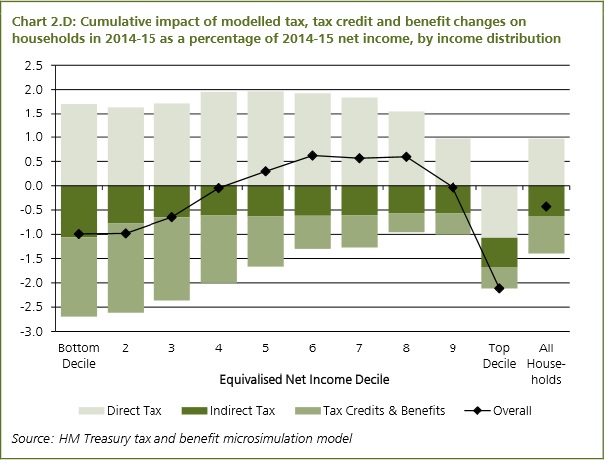