Back to the 20th century: our child poverty disaster

The rise in child poverty over the last six years has all but wiped out all the progress that had been made since the late 1990s. As the latest official poverty statistics showing this were published just before Easter, this is not exactly news. But the message needs repeating because the muted reaction to what can only be called a disaster suggests it is not just the UK government who would prefer to look the other way.

Ever since Tony Blair pledged to end child poverty within a generation, 18 months after becoming Prime Minister in 1997, poverty statistics have had the potential to make news. Interest was probably highest when the question was whether Labour would reach its first target, to reduce child poverty by a million by 2005.

2020 was also always destined to be special, because that was when child poverty was originally supposed to have ended. It is ironic that while the latest child poverty numbers, for the year to March 2020, do indeed contain a powerful message, that message is not about how much progress has been made but about how almost all of it has been lost.

The graph shows the official estimate of the number of children in ‘low income’ households in the UK in each of the 22 years from 1998/99 to 2019/20. It uses the version of low household income ‘before housing costs’ (BHC) have been deducted. Although most analyses of poverty usually use the alternative, ‘after housing costs’ measure, ‘BHC’ is what UK governments of all political stripes have preferred to use, including when targets for child poverty were written into legislation. 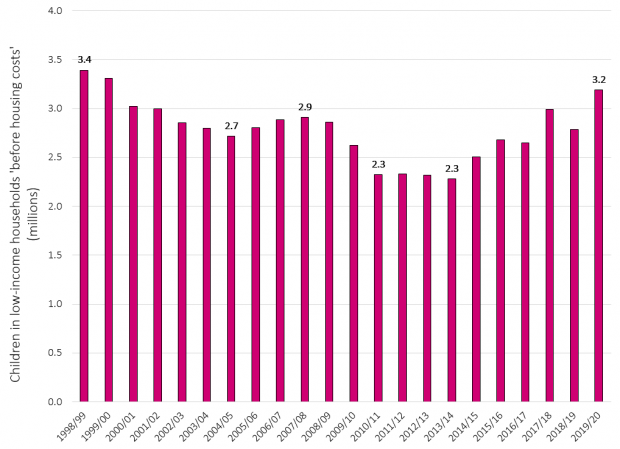 Source: DWP, Households below average income: for financial years ending 1995 to 2020, table ‘4_3tr’. The published figures for GB have been increased by 100,000 in each of the first four years in order to provide an estimated figure for the UK.

The graph starts in 1998/99 because that was when active policies to reduce poverty began. From 3.4 million children in poverty, the number fell to 2.7 million in 2004/05, rose to 2.9 million three years later and then fell again, to 2.3 million in 2010/11. Whether that last year is counted as part of the Labour record or not, child poverty certainly did fall by a million.

During the Coalition government’s first four years, the number of children in poverty remained unchanged. From 2014/15, four large rises and two small falls took the number in 2019/20 to 3.2 million.

There are three reasons why it is not too much to call the last six years a disaster.

Responsibility for this reversal rests in the first instance with the three UK governments that took the policy decisions, starting with the Coalition government which held social security down from 2013 at the same time as austerity more widely started to ease, and followed by the two Conservative administrations of David Cameron and Theresa May, which did nothing to change direction. This is the legacy of those three governments.

The question, however, is why these governments faced so little criticism for allowing this to happen. Although child poverty is back in the 20th century, the context is very different.

First, there are many organisations and individuals working against poverty, including well-respected, well-connected and well-resourced ones. Back in the 1980s, poverty was the preserve of a few pioneers. Nowadays it is mainstream.

Second, Conservatives are part of this mainstream. Conservative acknowledgement of poverty began when David Cameron became leader in 2006. It led to the creation of think tanks (the Centre for Social Justice), an extensive critique of the problem and Labour’s approach to it (‘Broken Britain’) and in due course, major social security reform (universal credit) after 2010.

The Conservative party’s 2015 general election manifesto, which mentioned poverty 17 times (twice as many as Labour’s manifesto), boasted of its success in reducing both pensioner and child poverty (the latter by 300,000, from 2009/10 to 2012/13 – as per the graph) and pledged to ‘work to eliminate child poverty’. However cynical one may be about election manifestos, claims like these are a hostage to fortune and a vulnerability that can be pressed if words are not matched by deeds. By contrast, even in the 1990s, some senior Conservatives were still disputing whether poverty existed.

Third, not all politicians and governments judge action against poverty to be unpopular, to be pursued, if at all, only under cover of darkness. New Zealand now has an ambitious, long-lasting and high-profile strategy against child poverty (and for child well-being) with which the Prime Minister is directly associated (holding the child poverty portfolio herself). So too does Scotland, which since 2018 has had a strategy against child poverty that is long-term (targets to at least the late 2020s), wide-ranging (for drawing in all parts of the public sector) and high profile (being directly associated with the First Minister). Following the Senedd election, it is possible that Wales too will now develop its own approach.

Action against child poverty or indifference towards such action is at all times a political choice. The child poverty rate is now as high in England as in the other three countries combined and it has in fact been rising faster in recent years. If Scotland and shortly Wales have chosen action, why should not England too?

This blog was first published on the NPI website, and is reproduced here with permission.