The small gains for ‘just managing’ families in today’s Autumn Statement are welcome but for most of these households, they will be dwarfed by the losses they will sustain as a result of Summer 2015 Budget social security cuts:

The Treasury is briefing that a single parent with one child and no housing costs earning £15,000 per year will gain £170 per year from the lower Universal Credit ‘taper rate’ announced today, but in reality today’s announcement simply means this lone parent will lose £3000 a year, rather than £3,170 a year, as a result of the substantial package of cuts announced in the Summer 2015 Budget.  (1)

“For all the talk, this was a rescue package for ‘just managing’ families that failed to turn up.  That’s hugely disappointing for those of us who felt that the Prime Minister was going to take robust action to help hard up families.  The Chancellor applied a sticking plaster to family budgets haemorrhaging losses imposed on them by his predecessor’s budgets.

“The Prime Minister knows the country isn’t working for just managing families.  These families have been left worse off and horribly exposed to rising prices. So it was surprising and disappointing that today the Government chose the better off and businesses, rather than ’just managing’ families, when it chose to spend billions on raising personal tax allowances and cutting corporation tax. 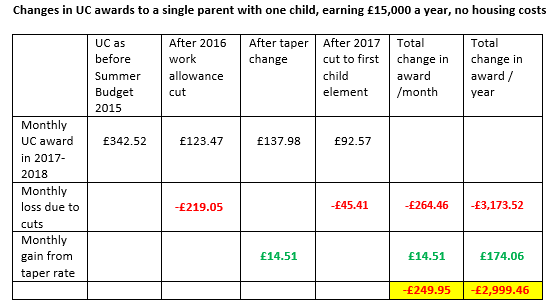